At its Oculus Connect event last week, Facebook announced the upcoming launch of its own social Oculus-based VR platform, called Horizon. Positioned as an ‘interactive world’, people will be able to create their own VR avatars and hang out with other players, play games and even build their own virtual environments. To help ensure that Horizon remains a welcoming environment, Facebook is also establishing new safety tools and providing human guides, called Horizon Locals, to answer questions and provide assistance to players. Facebook Horizon launches in 2020 but applications to join the beta are now open.

Facebook buys wearables company CTRL-labs
Facebook is in the process of purchasing CTRL-labs – a startup building an armband that translates movement and the wearer’s neural impulses into digital input signals. When the deal is finalised, CTRL-labs will join company’s Facebook Reality Labs division and it’s thought that its products will boost Facebook’s plans for non-invasive brain input devices (ie being able to do stuff just by thinking about it). Along with the talent joining the business from CTRL-labs, the acquisition will bring a number of new patents and IP rights to Facebook, as it looks to build out its augmented reality products.

Snapchat beefs up its video ad offering
At Advertising Week in New York, Snapchat announced that it will be relaxing its time constraints for ads, allowing marketers and brands to use videos of up to three minutes long. Previously, video ads had a 10-second cap  – which has been the case since the platform first started showing ads in 2014 – and users had to swipe up if they wanted to watch a longer version. However, as with the platform’s other video ad formats, the new three-minute ads remain skippable. 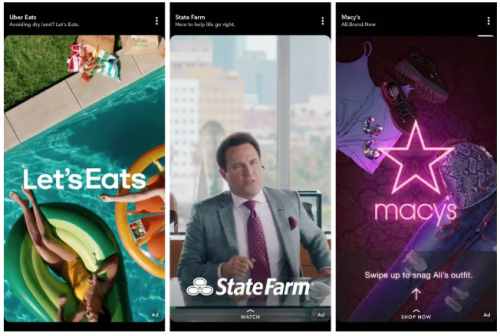 Along with the extension to its video formats, Snapchat is also creating a new way to target viewers based on their propensity to watch videos for longer periods of time, and is adding a ‘swipe up’ option to its six-second ads that appear within shows.

YouTube adds ‘Video Reach’ campaigns
YouTube has announced a new Video Reach campaign format which will enable advertisers to upload three different asset types — six-second bumper ads, skippable in-stream ads, and non-skippable in-stream ads — to a single campaign. Google will then use machine learning to determine the most efficient combination of the ads to maximise the audience reach. Early-access brands have reported that the format lowered campaign costs by more than 20 per cent compared to previous YouTube benchmarks. The Video Reach campaigns are available to all advertisers and currently run on YouTube’s desktop and mobile platforms.

Pinterest promotes shopping on its platform with new updates
Pinterest is going hard on its e-commerce offering, introducing several new updates including a new Collections format for Shop the Look ads on mobile. The new format enables retailers to feature multiple (up to 25) products in a single ad and it will roll out in the US over the coming months.

Along with the new shopping feature, Pinterest is also rolling out dynamic business profiles (complete with new video or image profile covers), a dedicated Shop tab, and catalogues and shopping ads – which will begin rolling out to select partners in France, Germany, Spain and Italy.

Watch this space….
Facebook has begun trialling hiding Likes on posts from users in Australia; Instagram has expanded its Branded Content Tags (for those users lucky enough to have them) to longer-form IGTV content; and Twitter has started working on a new option to help users more easily locate content that’s been shared via direct message.