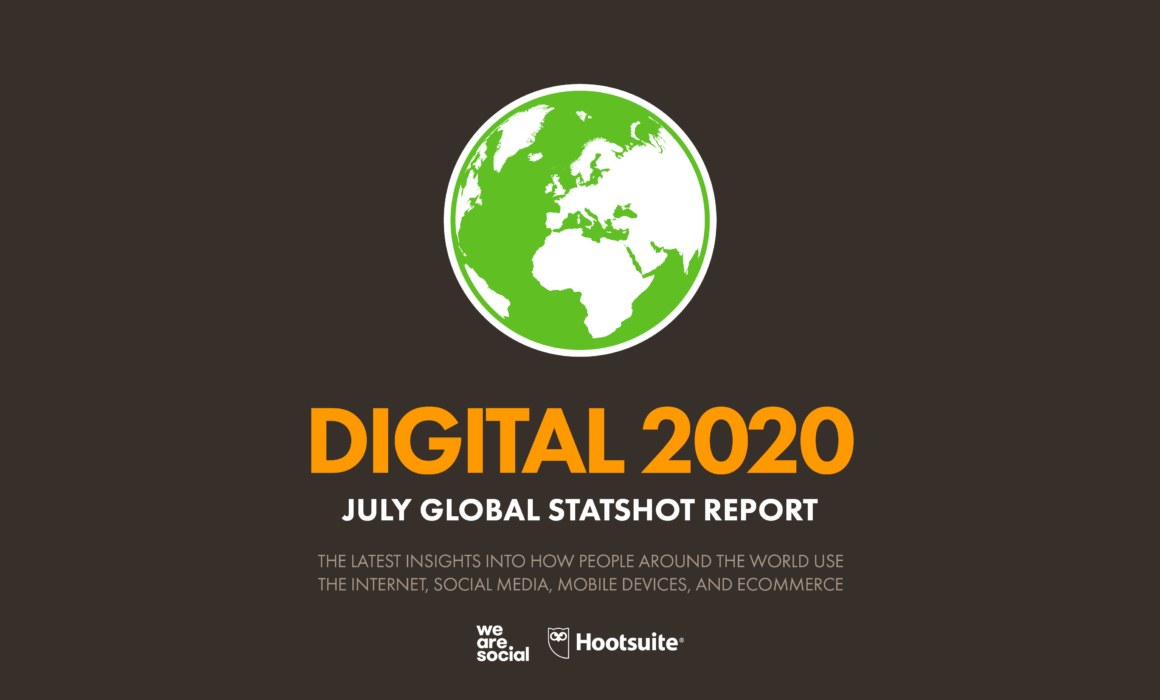 The new Digital 2020 July Global Statshot report from We Are Social and Hootsuite reveals that – for the first time – more than half of the world’s total population now uses social media. 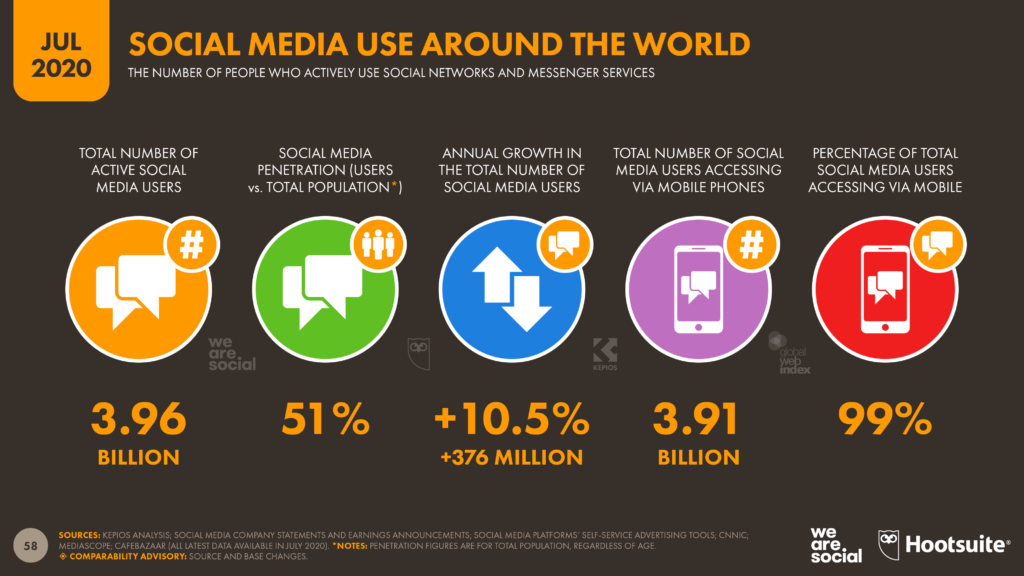 Put simply, this means that more people now use social media than do not.

This milestone is all the more impressive when we consider that most social media companies restrict the use of their platforms to people aged 13 and above. In fact, the latest numbers indicate that nearly two-thirds (65 percent) of the world’s total ‘eligible’ population now uses social media.

And adoption is still growing rapidly. Worldwide user numbers have surged by more than 10 percent over the past 12 months, with an average of more than 1 million people starting to use social media for the first time every single day since this time last year.

With more than 376 million new users since July 2019, that translates to almost 12 new users every second, suggesting that user numbers are growing even faster today than they were at the start of 2020. 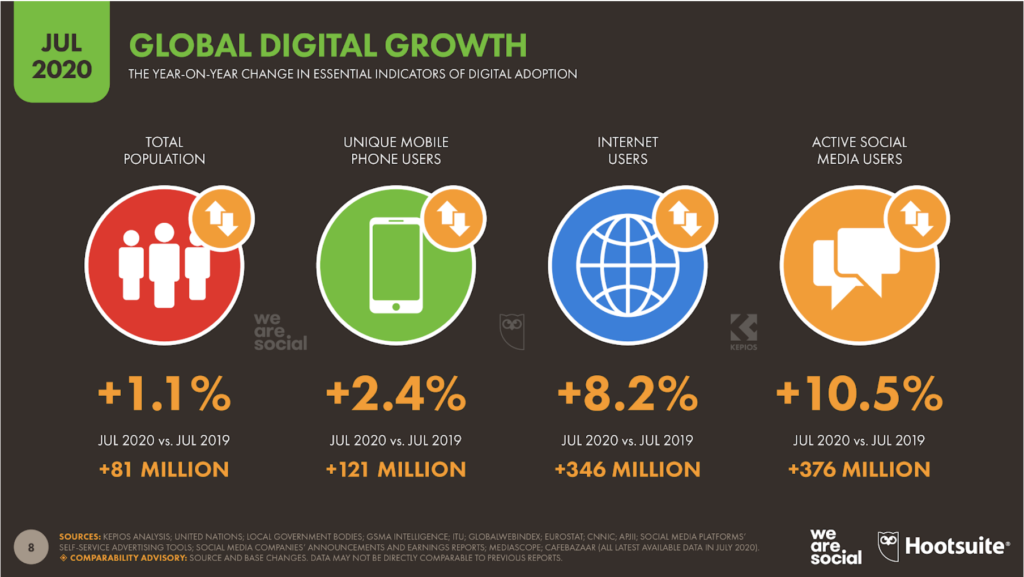 That figure for Middle Africa rises to 12 percent if we focus on populations aged 13 and above, but that still means only 1 in 8 people across the region who are eligible to use social media do so today. 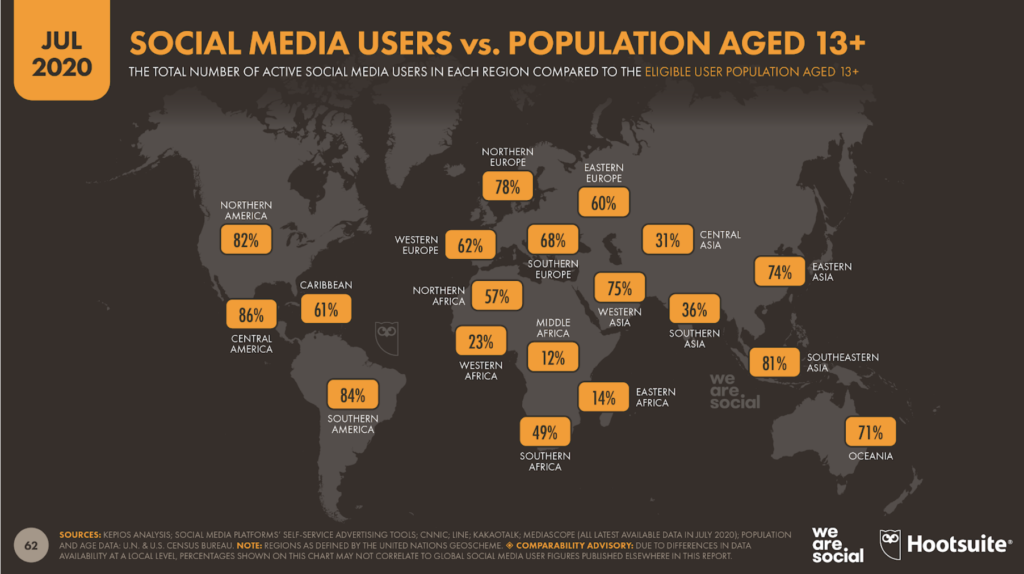 Use also differs by gender, with the data suggesting that there are almost 1.2 men for every woman using social media around the world today.

This ‘gender divide’ reflects a broader pattern in both mobile and internet use, but it’s important to stress that the picture varies considerably by country and by region.

For example, women account for more than half (55 percent) of all social media users in Northern America, but barely one quarter (25 percent) of users across Southern Asia.

Women are also under-represented across Africa, where they account for less than 2 in 5 of the region’s social media users.

However, there are encouraging signs that this gender divide is closing, with our analysis indicating that the global social media ratio has narrowed from a 45:55 split (women to men) at the start of 2020, to 46:54 today. 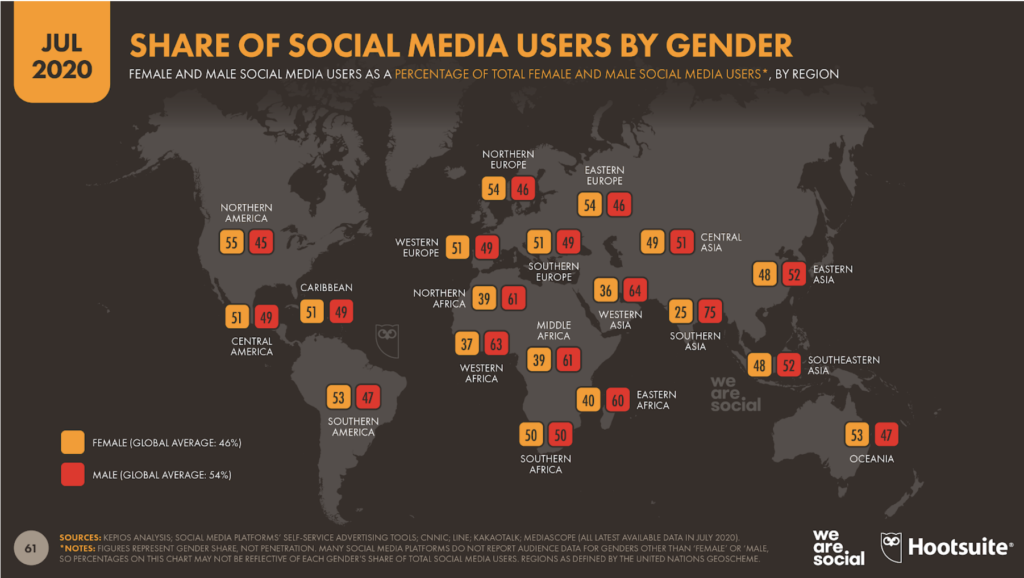 People are also using a wider variety of social media platforms than ever before, with the latest data from GlobalWebIndex showing that the typical social media user is now a member of almost 9 different platforms.

As we’ll explore in more detail below, this number will likely have been buoyed by people’s activities during the recent wave of Coronavirus lockdowns, when people spent a considerable amount of time using social media and trying out new apps. 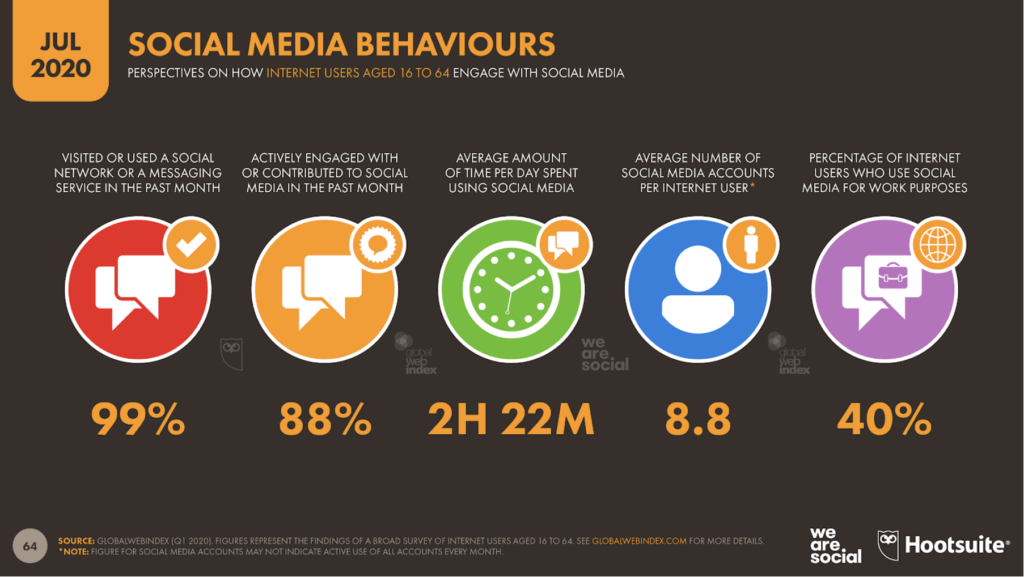 Instagram has also seen impressive growth over recent weeks, with the company’s latest advertising audience data indicating that more than 1.08 billion people now use the platform each month.

This means that Instagram is still comfortably ahead of TikTok when it comes to monthly active users, but our analysis of various data points indicates that ByteDance’s short-form video sensation is still growing rapidly (note that the 800 million figure that we report for TikTok this quarter no longer includes Douyin).

The Indian government’s recent move to block TikTok in the country may slow the platform’s growth, however, with DataReportal analysis indicating that India may be home to as much as a quarter of TikTok’s total global user base.

TikTok hasn’t been the only beneficiary of people’s increasing interest in ‘social video’ though. The short-form video market is also hotting up in China, where Douyin (抖音) – TikTok’s mainland-Chinese incarnation – and compatriot Kuaishou (快手) are now tied at 400 million monthly active users.

Beyond video platforms, Sina Weibo has also been growing rapidly, and China’s largest microblogging platform now claims 550 million monthly active users, up by 18 percent (74 million users) over the past 12 months. 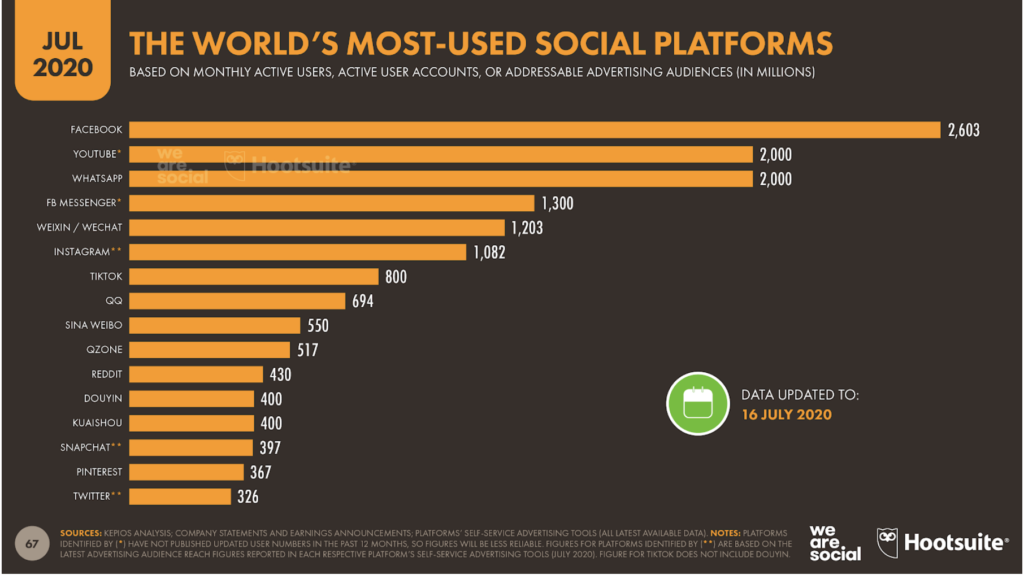 It is worth stressing, however, that many of these platforms’ audiences overlap.

Data from GlobalWebIndex suggests that only a small fraction of each platform’s user base is unique, with more than 95 percent of Facebook’s users aged 16 to 64 reporting that they use at least one other social platform.

That figure is even higher for smaller platforms, with the latest data indicating that marketers can now reach more than 99 percent of the users of Snapchat, Twitter, and TikTok via other platforms.

Given these high rates of overlapping use, our advice to marketers would be to focus more on the creative and contextual opportunities offered by each of these platforms, and try to avoid getting distracted by the constantly changing user numbers. 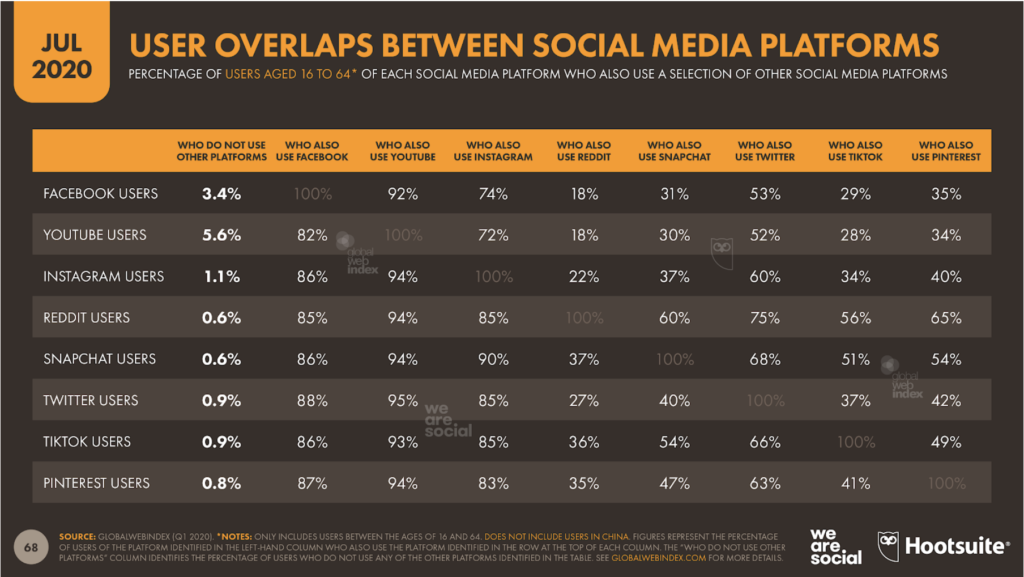 Going beyond the numbers

It’s also worth highlighting that monthly active user figures don’t always tell the full story when it comes to social platforms’ roles in our lives.

For example, the 2 billion figure we use for YouTube is based on Google’s reports of how many people use the platform while logged in, but our analysis of broader data suggests that the number of unique individuals who watch a YouTube video each month is likely to be significantly higher.

Similarly, while Twitter’s latest advertising audience data suggest that roughly 326 million people logged in to the platform over the past 30 days, data from SimilarWeb indicates that twice as many people may visit Twitter.com in any given month. 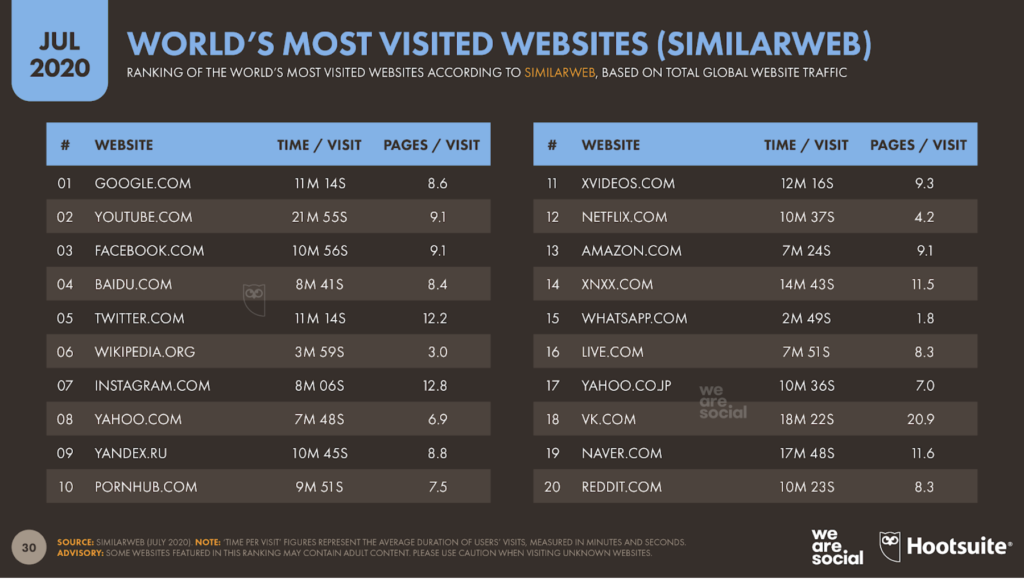 This demonstrates the important role that Twitter plays as a source of news, even for people who haven’t actively signed up for an account.

The latest research from the Reuters Institute for the Study of Journalism supports this theory, with the organisation’s new Digital News Report 2020 finding that Twitter remains a popular source of news, especially for people in English-speaking countries. 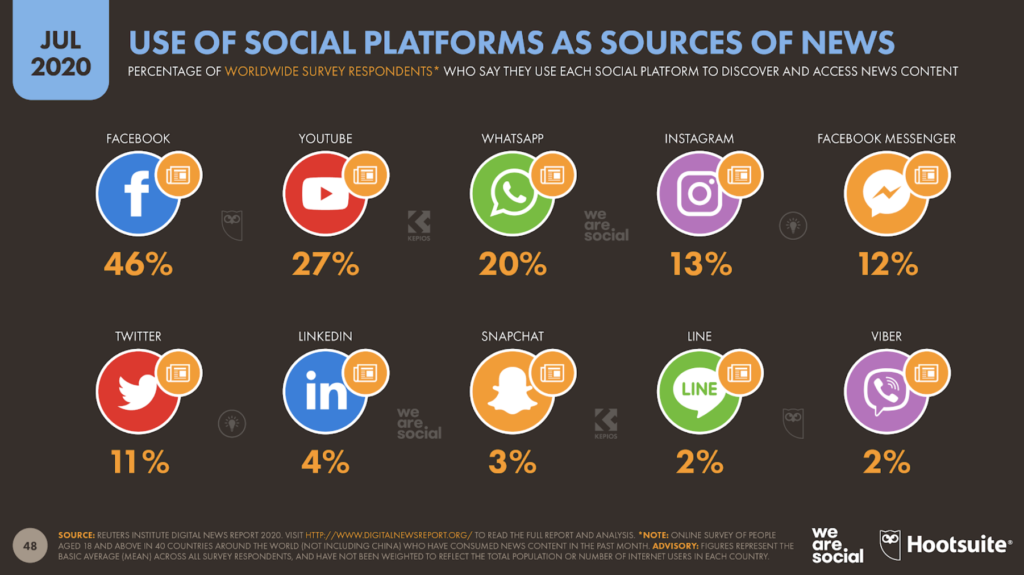 One of our favourite online activities

Perhaps unsurprisingly given all of the above, the latest research also indicates that people are spending more time using social media.

In their huge study of how the Coronavirus pandemic has been influencing people’s digital behaviours, GlobalWebIndex has found that more than 40 percent of internet users have been spending more time using social media in recent months, with that figure rising to more than 60 percent in the Philippines. 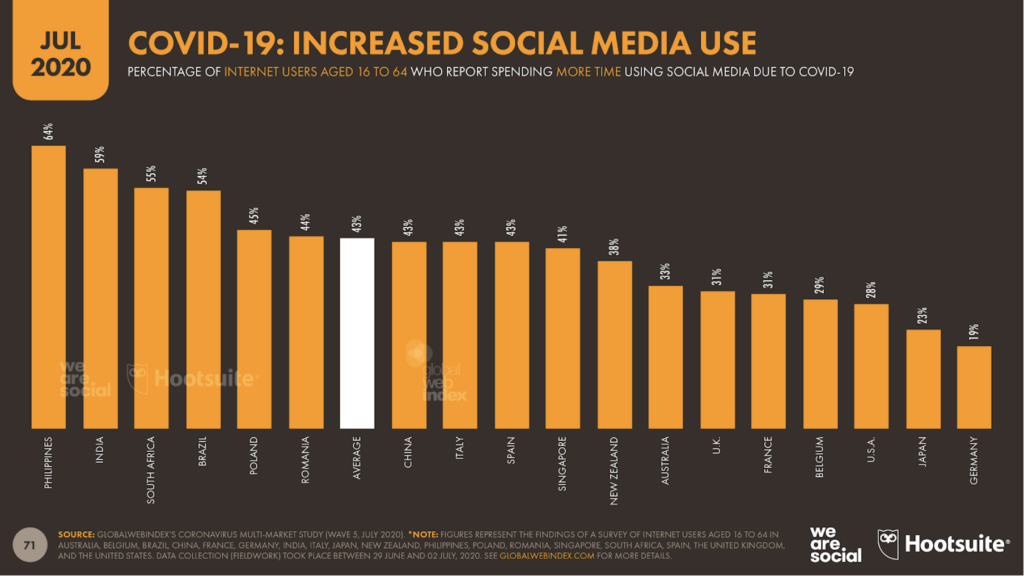 However, this data is based on surveys conducted between January and March this year, so there’s a good chance that the recent spate of COVID-19-related lockdowns will have resulted in people spending even more time using social media each day.

Even based on those Q1 figures though, the combined time that the world spends using social media now adds up to more than 1 million years every day. 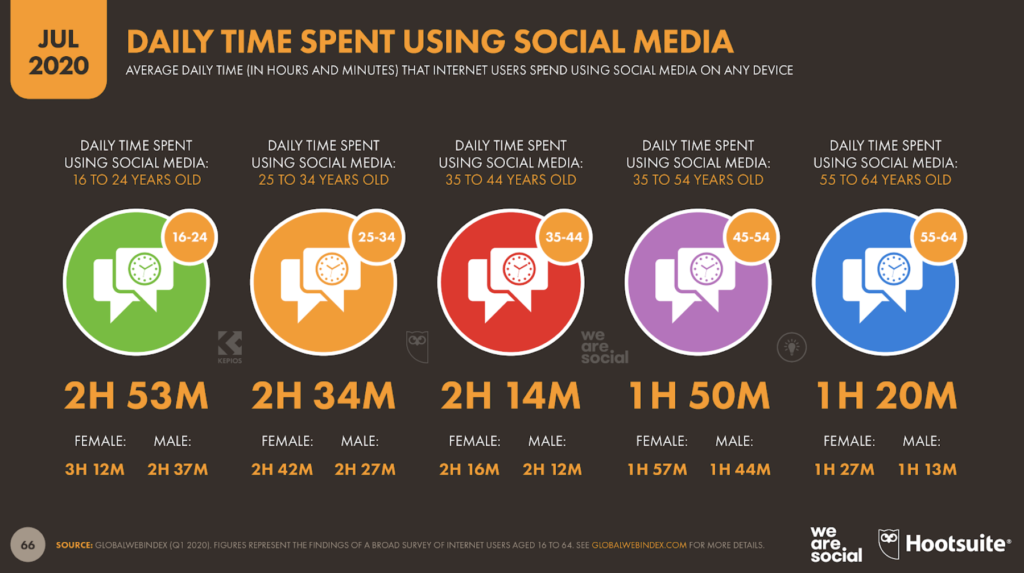 People’s social media behaviours have been expanding too. Data from GlobalWebIndex show that staying in touch with friends and family is still a primary motivator for social media use, but that we’re increasingly turning to social platforms to help with other kinds of activity as well.

More than half of the respondents in the Reuters Institute’s Digital News Report 2020 survey say that they use social media to access news, which is double the number of respondents who say that they read newspapers.

Indeed, GlobalWebIndex reports that “staying up to date with news and current affairs” is the single greatest motivator for social media use at a global level.

As you might expect, socialising is another top driver for social media use, but so is entertainment. “Filling up spare time” and “finding funny and entertaining content” are the second and third most frequently cited reasons for using social media.

However, people are also increasingly turning to social platforms when they want to learn more about products and services that they want to buy.

Globally, social networks are now the second most popular destination for internet users looking for information about brands, with only search engines used by a greater number of people. 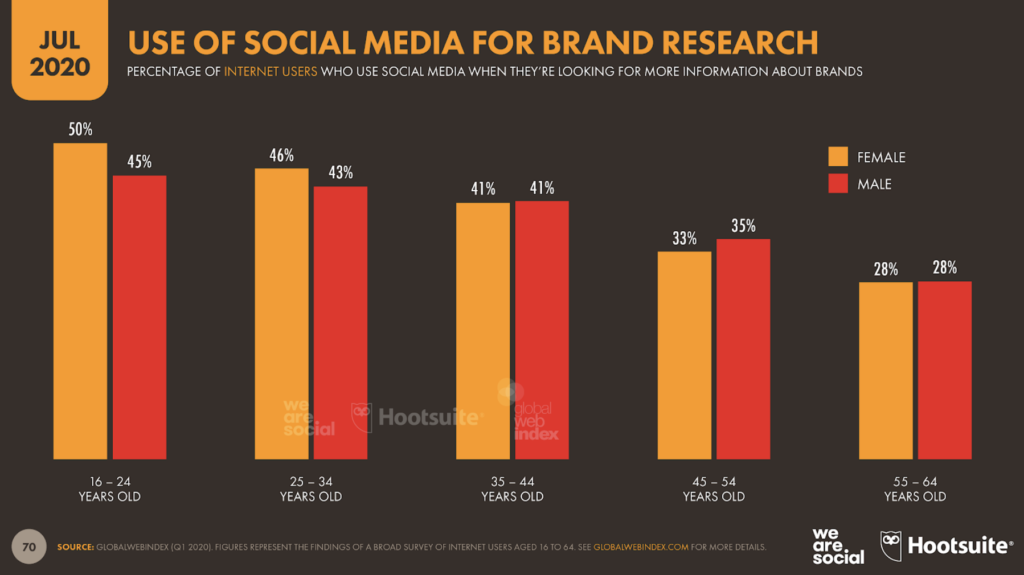 Given the broadening role of social media in people’s lives, it’s important that marketers and communicators think more broadly about where social media fits in their plans.

Critically, social media is increasingly a ‘layer’ that permeates almost every aspect of our audiences’ daily lives, rather than being a distinct ‘destination’ with a more siloed sphere of influence.

The trick to making the most of social media today is to understand how these platforms can complement and augment all of our marketing and communication activities.

My advice would be to think less about populating a content calendar, and focus more on identifying and initiating the conversations that matter most to you and the audiences that you care about.

Social media use in context

Despite all of these impressive figures, however, social media still only accounts for about one-third of the time that people spend using the internet each day.

So what else is the world doing online?

We explore that question in this article, where we analyse all of the other essential headlines from our new Digital 2020 July Global Statshot report.

And if you want to dig deeper into our complete set of social media numbers, you’ll find them all in the SlideShare embed of the full report below (click here if that’s not working for you).